What happens when a girl from Perry county and a boy from Craley PA get married and have a child. Said child is automatically attracted to the creeks/river, and is a savage. Happy Mother’s Day to my beautiful wife and mother of Fletch $. . . . . #love #mothersday #creek #riverrat

Management decided to hold our 2015 team camp down in Davenport Florida to coincide with the Tampa NCC crit. It would be one of the few times where the whole crit squad would be in the same place as the stage race squad. On Wednesday before my flight out, Andrew our director sent a text that the race had been cancelled due to a sponsorship backing issue.

Disappointed, changes could not be made as flights were booked and the team house rented. While not the best place to train, we were going to make the best of it. On Thursday, they were calling for snow in PA so my girlfriend Jamie dropped me off at my buddy Brandon’s house the night before, who lives right near BWI.

We woke up and I saw my flight was on time. Making the trek to the airport it started to snow, but nothing compared to what BWI had seen this winter. So I checked in and got on the plane. We rolled out for de-icing, then an announcement came over the intercom. Apparently there was a gauge issue and we had to make our way back to the gate. From there we were promised we would be leaving in 15 minutes, every 15 minutes until, eventually; we were at the gate for 3 hours.  Finally we made it into the de-icing line, waited for a while, then took off 4 hours late. If you want to see mad, you should listen to the older gentlemen who were missing tee time.

Upon arriving, my team director Andrew picked me up and we headed to find some food. We hopped off an exit, and luckily found the shadiest gas station subway in the entire country. We ate the food and made our way to the team house. At this point I was pretty nervous because I was about to meet 14 different people.

Rolling in I knew we made it to the right place. Shirtless dudes with tan lines working on their bikes. I quickly hopped in and started to dial in my new Litespeed training bike, which was already pretty dialed thanks to our awesome mechanic Matt Kelley.  After that, I walked in the door and found a box that said, Barry, Jake? It had all my new team Pactimo team gear, Bolle glasses, Limar helmet, Soigneur chamois cream, and Northwave shoes. I was so stoked because I ordered the right size; an XS Jersey is baggy on my arms so I must have done something right over the winter. As for the Barry or Jake issue, Clay started me calling me Stifler in his Aussie accent, and sadly; It’s sticking.

The 2015 team roster is a super exciting team with a wide variety of talents.

Brecht Dhaene- The Belgian tall man. Who has crushed races in Europe, and will make huge waves in the US this year. (Won an NCC Crit last year)

Cortlan Brown- Hails from Utah, and spent two years in the Phillipines helping the poor as a missionary. Upon returning he put his dedication and talents to racing bikes, and won collegiate road race championships.

Jake Silverberg– Smoothest talking 18 year old I’ve ever met. Looks like Rinaldo and is from Miami.  As a little side note, he won crit nats as a junior.

Dan Gardner- Single,18, fast, first year pro, and has one amazing English accent ladies. You can find him on Tinder.

Matt Green- Captain of the team, left England at 17 and has been traveling the world as a pro ever since.

Clay Murfet- The Aussie who recruited me. Been racing professionally since he was a wee lad, and will be starring in the new film “50 shades of Clay”.

Stephen Hyde- He’s the friend of Jeremy Powers, our team’s fill in rider, and also happens to be one of the best cyclocross racers in the country who just signed with cannondale/cyclocross for the upcoming cx season.

Max Jenkins- Super talented bike racer whose proven himself multiple times throughout his career as a GC rider in big races all throughout the country and world.

Ryan Aitchenson- Apparently he has the best laugh in the peloton eh? Canadian, nice guy, and won the first race for the team this year.

Adam Myerson- I think he’s done a bike race once or twice. Or more like more years than I’ve been alive. Adam is writing his last chapter with us this year, and will pass on his knowledge as the crit captain.

Justin Williams- Baller, stylin’, and the u23 crit national champion. Also happens to be one of the fastest sprinters in the good ol USA.

Hogan Sills- Civil Engineer who graduated from Purdue, now racing bikes for the crit squad. Also was bit by a snake the first day of camp and gave zero effs.

Peter Olejniczak- You have to say Ole, point to your knee and say Knee, then make a ✔️ to say his last name. Also won an NCC crit last year.

Getting to know everyone was actually the easiest part. The team got along really well, and we had a great time telling jokes or stories.  We did introductions, sponsor meetings, and even got to race locally on Sunday.

For the local race, the plan was to cover attacks and put as many Astellas riders in moves. Being active was a huge goal of ours, and we didn’t fall short. I covered moves all day and bridged to two breaks, the second was Clay, Cortlan, and myself. We held for a bit but eventually were caught by the chasing group. Being flat, setting a break was difficult at the high speed.  After our break was caught, Brecht and Matt countered with 2 others. Which turned out to be the break of the day.

With around 30 mins of racing left, I followed some wheels into the chase group of 12 with Clay, Adam, and Brandon. We didn’t want to catch the break, but I had to stay on the front, rotating through so those guys could sit on, just in case they did catch. With around a lap to go I finally cracked, and hoped for the best.

Surprisingly the group of 12 caught the break right after I pulled off, due to the fact Brecht and Matt were taking turns trying to drop their break mates. However the one was too strong and would follow every wheel with ease, so they didn’t want to take him to the line. Even though their break was caught, the rider still won the sprint finish, while our rider Brandon Feehery took second. I’m not mentioning the winner’s name because he just returned from a 2 year doping suspension and doesn’t really need any acknowledgement in my opinion. Not excusing a loss, rather I don’t have a ton of respect for the sort.

Monday we dialed our bikes in more and went for a recovery spin, while Jamie Smith shot pictures of the team. We rode for 2 hours while practicing our pace line behind the team car. On Wednesday we went long, with around 6 of us doing right under 100 miles in 4 hours. The last 30 minutes was close to all out, rotating through.  Going that fast with 5 other teammates with a team car following, and an action cam in your face was definitely a new experience. After the ride, we took a nap and packed up our training bikes to head home. Currently our racing bikes are in the team sprinter headed out to California. 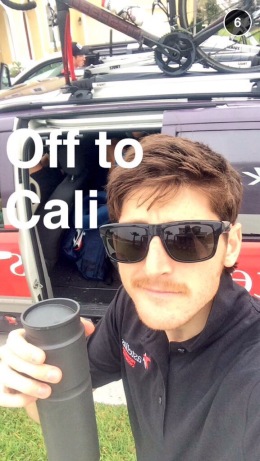 So that brings us to now, I’m on a plane to Cali. We will be racing San Dimas from Friday to Sunday. Friday is an uphill time trial, so I’m excited to get a chance to test out my strengths. It’s been a really big winter of training for me, putting in double what I did last year. (I’m still relatively new, so that’s not terribly hard). Regardless, uphill time trials can be hard to execute, but I look forward to the familiar pain.  There’s no part of cycling that reminds me more of running than 10-20 minutes of flat out uphill climbing.

So remember ladies, if you’re 17-21 and into English guys. Dan Gardner is your guy. And if you see him on tinder. Swipe right.