It’s Monday, and we just finished San Dimas stage race weekend.  After camp, the team split up and headed to our respective races.  The crit team plus Clay went to the Sunny King crit in Alabama, and the rest of us came out to Cali for San Dimas. Clay broke his arm in last year’s race so he opted out of San Dimas this year.

After flying to Cali, the original plan was to be picked up by our team mechanic in the team bus. Unfortunately he had a bit of an issue in Texas, so we had to stay in an airport hotel. After getting off the plane, we headed to our bags and the hotel pick up area.  At this point, we were a bit skeptical of our destination.  Only to be later confirmed when we were picked up in a decked out sprinter van with disco lights, and a cracked out driver. We rolled off the party bus, and walked into the twilight zone.

Apparently, downtown Inglewood isn’t the best place for a professional bike team.  Once in the lobby, a small panic began to form over our faces.  Each of us trying to hold it together for the other.  There were security cameras everywhere, and a lot of other “interesting” sights.  We were led to the room by some creepy guy, and we immediately locked the doors.  I checked the bed for bed bugs, and decided it would be best to sleep in my clothes. The hotel towels looked like they cleaned up a mustard spill, so we figured a shower might be a bad idea.

After turning on music to drown out the loud banging noises, I finally drifted off to sleep.  At 6 am I was awaken by someone at our door. They tried to get in, but the dead lock kept them out.  Primal fear overcame my whole body as I laid there with my seat and seat post in hand as a weapon.  (Thanks 3T and Smanie for the protection).  Once the nerves went away, I finally fell back asleep to be awoken by the strong scent of “herbs”.  At this point, it was best to get up and get out of dodge.  (Later on I found out that my credit card was hit for 4k and I never even used it in California, someone in the lobby must have swiped my pocket, and my teammates pocket).

At this point, we hailed a taxi and told him to take us to the beach.  After shoving more suitcases and bikes than possible into the tiny taxi we headed for Venice.  He asked us what we were doing there, saying that the Adventurer was for druggies and prostitutes.  He laughed when we told him we raced bikes.

After narrowly missing about 15 accidents, we finally made it to Venice beach.  We went into the Terrace cafe, and laughed off the nightmare of a night.  After some great coffee and a meal, we decided it was time to head to the beach.  We dragged the bikes and luggage about 50 meters to a  bike path and parked it.  We chilled and people watched until our mechanic picked us up. 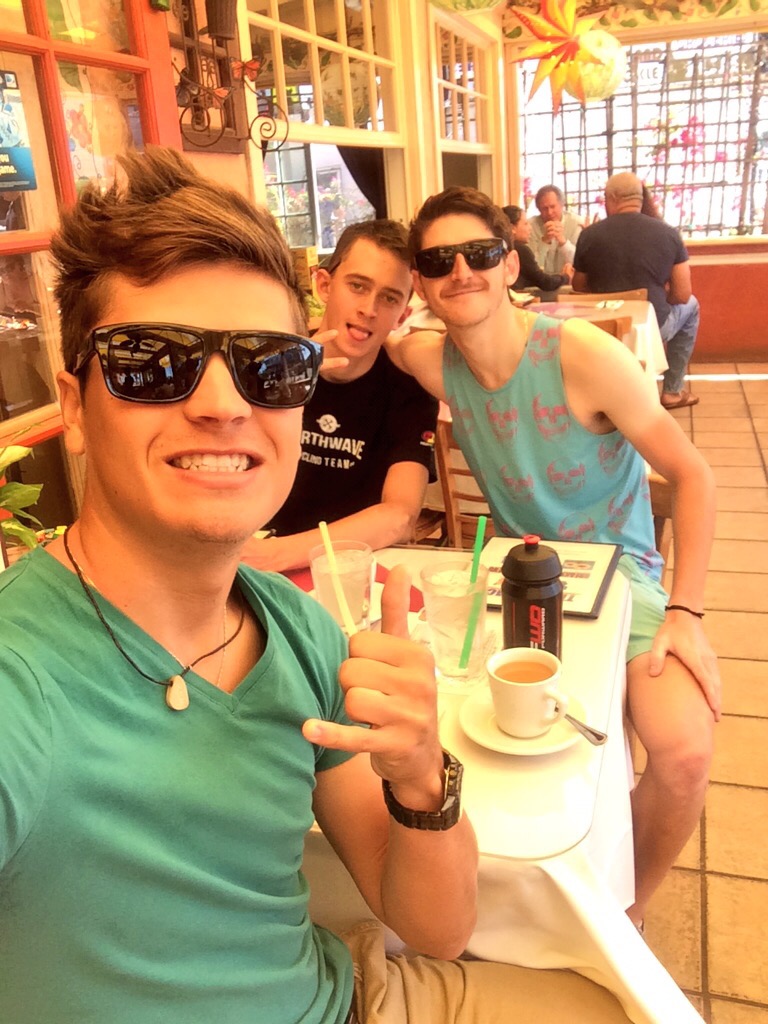 That night, we did a late night recon on the TT course.  It was hard to gauge the course at night, but it was an awesome experience.  I told my teammates I was going to do some openers and would go up ahead.  At this point, I was feeling good and getting into the climb.  Around 3 miles in, I heard a terrifyingly loud noise on my right, and scampering across the road.  I immediately had a deep gut feeling that whatever that was, was probably more terrifying than what tried to get into my room at 6am.  I shot back down the hill to my closest teammate Matt; we rolled up and heard the tree shaking to our left. OPENERS TIME.

I was pretty nervous before the time trial.  I wanted to do well, and had a lot of pressure on myself.  The team thought I could climb, and so did I; but I’ve never really climbed the western mountains.  It was hot, but I was extremely focused on nailing my warm up.  I was so focused that I rolled up 10 seconds late to my TT, as I was the second starter.  I threw my foot down, and sped off.  The plan was to hold 365 watts the first minute, bump up to 375, then do 400 for the rest.   I went straight to 465 with the adrenaline rush, and flew up the first part. Once the adrenaline wore off, I settled into my pace and quickly caught the starter before me.   Time trials are difficult, because cracking yourself is pretty easy.  Especially with too fast of a start.  Regardless, I was motivated and held onto my watts.  Once back at the bottom I checked my garmin and it totaled to 15:42.  The guys said this was good, and could land me in the top 15.  In the end, my time was top 15, but my 10 second penalty put me in 18th out of 161 starters.  My own fault, and something I won’t let happen again.

I was sitting top 20 for the team, so the plan was to hold GC spots, and go after KOM points the next day. Dan and Jake Silverburg were assigned to lead me out on the second lap for the first sprint point. Sadly, Jake was crashed out within two turns, and Dan and I got separated in the strong lead out.  I got on the train flying into the first point, and jammed it for the climb.  Came across top 5, but didn’t want to overextend myself to take the win.  It’s a little early in the season, and I don’t quite have the punch I will by June, so I was happy knowing I can still mix it up.

Around six laps in, I brought Brecht to the front as we headed into the feed zone.  Heading up the zone, it was pretty chaotic each lap, but this one especially. On my right, I saw a guy being blocked by another feeder  After grabbing my bottle, someone slammed into my hip and I flew over the bars.  A rider came down on top of me, and I gave him his bike and pushed him off. I picked up my bike, and the cockpit was sideways.  I tried to fix it, but it wasn’t moving.  I yelled for the mechanic, and he got me back somewhat straight. (Apparently, the guy who was being blocked got around the guy holding him back and ran up the hill chasing after his rider.  He then proceeded to take me out) I chased for a lap, but they were too far gone.  If the race would have had a caravan, I would have been able to get back on. Thankfully, Max, Matt, Brecht, and Cortlan were able to finish, Cortlan and Max went for the win with 3k to go, but they were brought back and Matt hung on for 9th in the sprint. A solid result for the team, as it’s our first stage race together.

On Sunday, we woke up and went to a coffee shop ride with some awesome Astellas US employees.  They bought us coffee, and we went for a spin around the prior day’s road race course.  Having such supportive people is what allows us to do this.  At the coffee shop, it was my first time having a Flat white. Totally recommend trying one if you haven’t. 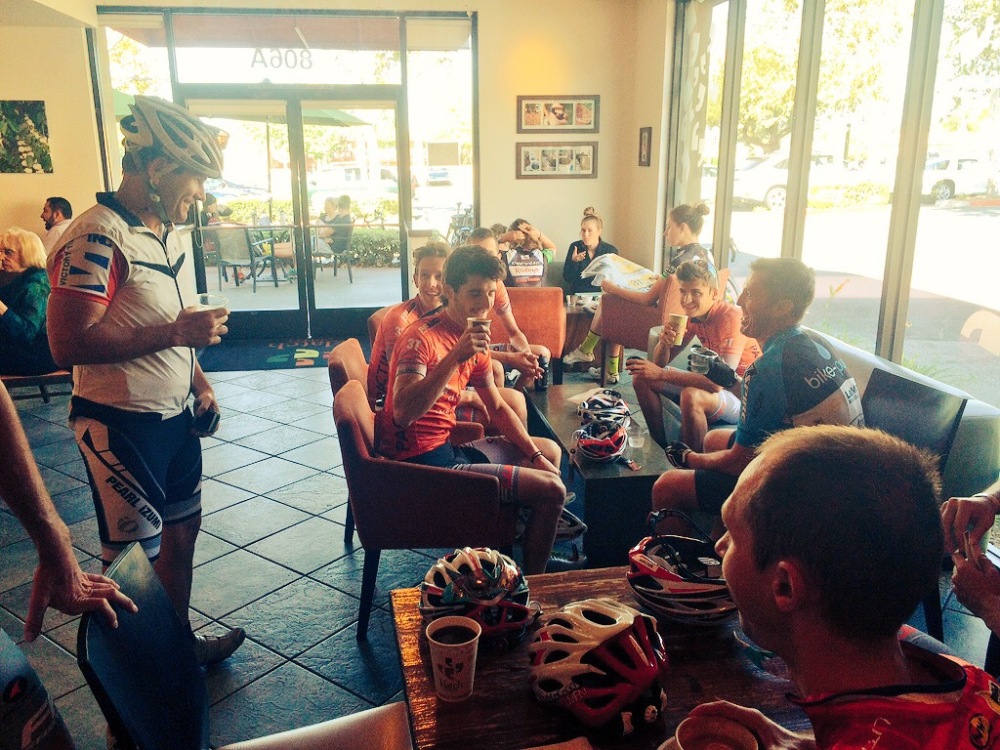 The crit was that evening, but since I was crashed out, I decided to go for a big ride with Dan.  Dan did his job at the beginning of the race on Saturday, and struggled a bit midway, so he pulled with a few laps to go.  Being young, it’s hard to jump right into the American pro scene, but it will be exciting once he gets it in a few weeks.

Guys from Cali told us about this awesome loop, so we headed out for a few hours.  We ended up climbing around 4300 ft into this town called Mt. Baldy.  We stopped at a little lodge and ate some lunch.  Being limited on outside seating, we met with this awesome couple (Cary and Catherine) who own an Avocado farm in California.  They even offered us host housing at their guest house if we ever end up in Oregon.  From there we descended back into San Dimas, to watch the remaining guys smash the crit.  Max, Matt, Brecht, and Cortlan stayed strong in the Crit, and Brecht finished in the top 15.

After getting back from today’s recovery spin, I just wanted to thank our host Tom Mee. He’s been more than accommodating and has definitely made the podium of host houses.  Not only can he shred on the mountain bike, but he always had us laughing. 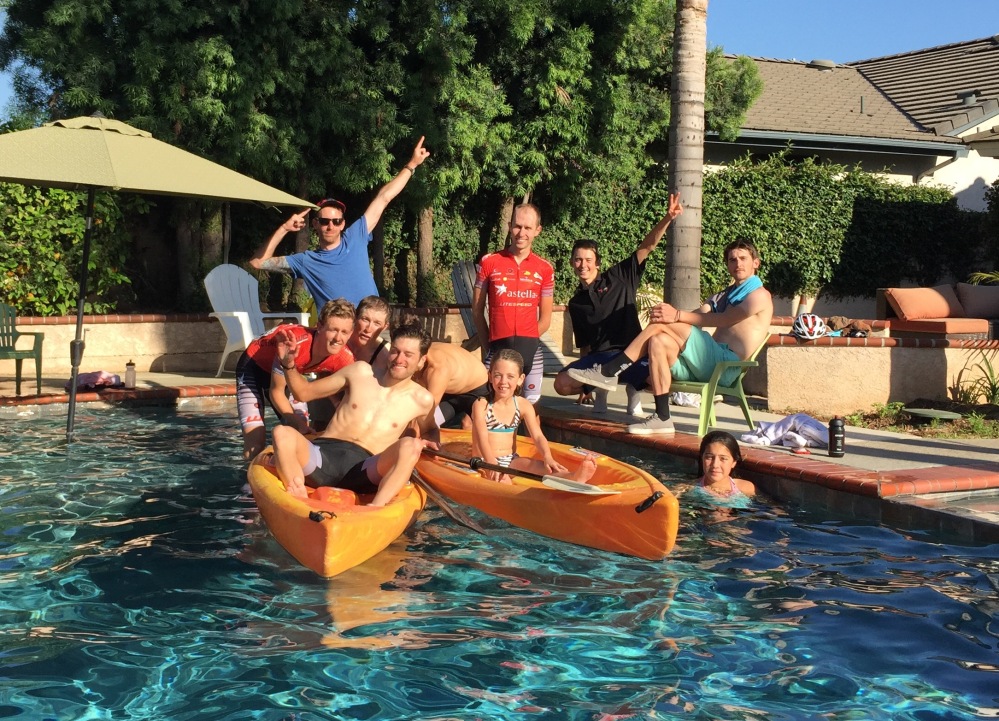 From here, a few of us are headed to Thousand Oaks to start training for Redlands in 10 days.  Redlands will be the first NRC race of the season, and a true test of where we are at as a team. 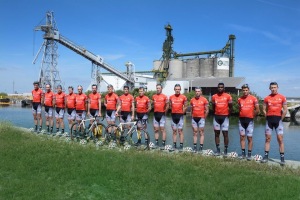 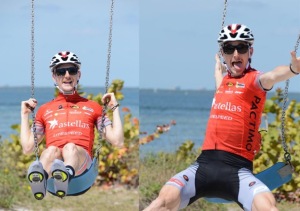