Rooted! As my Euro teammates would say. In context, “Dude- that race was so (expletive hard) I’m so rooted”.  Rooted was pretty much exactly how I felt after Air Force Classic.  It was the week after Philadelphia Classic, and I really had no idea how much longer I could hold the momentum.  Thankfully I had a good 2 days, and I had some podiums to show for it.

Took me forever to write this thing. After Air Force- I was pretty cracked. I raced every road/stage race in the first half of the PRT series, and was ready for a break.  On the life stand point, my sister got married and I had to be a responsible human being on the home-front.  As far as exercise, the fiancee and I bought a SUP board, so I took a few weeks of doing that, light riding, and motivation finding.

(Rewind 3 months)….Once I got home from Gila, I took a small break and geared up for USPRO, Winston Salem Crit, Winston Salem 1.1, and Philly Classic; all which took place in 7 days.  I was hoping to peak around that time, as Winston Salem really seemed to suit me last year….Until I was sliding 42 mph on my collarbone into a ditch that is.  (Thankfully the pot hole was filled this year)

USPRO- was on a new course this year and in a whole new state (Winston Salem North Carolina), and it was HOT.  Lots of up and down, with not a ton of momentum. The attrition rate was insane, I constantly felt like I was on my back foot in the chase group making its way to the front.  On lap 7 or so, I remember Bookwalter from BMC getting gapped coming up the climb and I was on his wheel. I couldn’t come around and was left to chase with some of  the world tour guys. We eventually made it back to the front group, for yet another break to go.  On the second to last lap, I came completely undone coming up the climb.  There weren’t many guys left, and I was having trouble feeding on the high pace.  I cracked, but then I was like- No way am I letting my race end like this.  I chased through the caravan as hard as I could (nearly being killed by a team car flying around a turn), but finally caught back on midway through the last lap.  Coming into the final climb I was actually feeling pretty confident, I gave it one good dig with the guys then BOOM.  The parachute threw out, and the ol’ legs gave up.  I crawled in for 22nd, 24 out of 90+ finished.

Winston Salem Crit-being 4th last year, my team wanted me to ride in support of Ryan, as he was on good form at the time. After I covered a bunch of moves the first half of the race, I became about as helpful as Santa’s Elves on strike. Winston Salem UCI road race 1.1– Here’s where that whole rooted term starts to come into effect again.  It was another hot day, and we had a 110 mile bike race ahead of us.  Add in a bunch of pros who didn’t race USPRO, and you’ve got one fast race.  Surprisingly the legs weren’t so bad, and I found myself in a few of the day’s breakaways. With about 1 lap to go, only around 30 guys of the 150+starters were left.  I put in a big dig up the final climb, and just missed the front group of 12, coming in 15th a few seconds back. I was actually really stoked with this result, it was a 1.1 and I scored my first UCI points on the road. Travis Livermon’s famous post race Winston Salem Extravaganza– The night started with some “sodas”….throw in some soigneurs out arm wrestling your teammate (I won’t name him), a 2 am Denny’s session, and you’ve got one heck of a post race party. Drive to PA-This drive was special to me, I didn’t have a shattered collarbone, and I didn’t grimace in pain every time we accidentally hit a crack in the road.  I also ate 2 chipotle burritos, bag of chips, and frozen yogurt in less than 20 minutes.

Philadelphia International Classic– I could probably write a whole blog about how romantic this race is to me. Being a PA kid, growing up watching the race etc.  But I think just about every US pro feels a special connection to Philly. It’s not like any other race, it feels bigger than that-the cops, the people, the wall, Lemon Hill, the connection; everything just seems heightened.

Honestly, other than winning some major race, I don’t know if I’ve ever had a better experience on the bike. My family and friends were all on the wall at my fiancee’s cousins house having a huge party.  My teammates did an amazing job keeping me protected going into the wall every lap.  It’s pretty unreal how hectic it can get fighting for positioning going into that right hander; having a full team is so important here.

I was making the splits up the wall each lap, and never felt like I had to chase back.  Around half way through the race, I watched the break go, and my teammate Max bridge. This was setting us up well. With 2 laps to go, the break came back, and about 60 of us were left.  Max did his best getting me into position coming into the wall, but we couldn’t come beside the power houses.  So I played the only card I had left if I wanted to be somewhere on the first page of Results.  Right before the right hander, I laid down my hand, “CHOPPING!!!”. 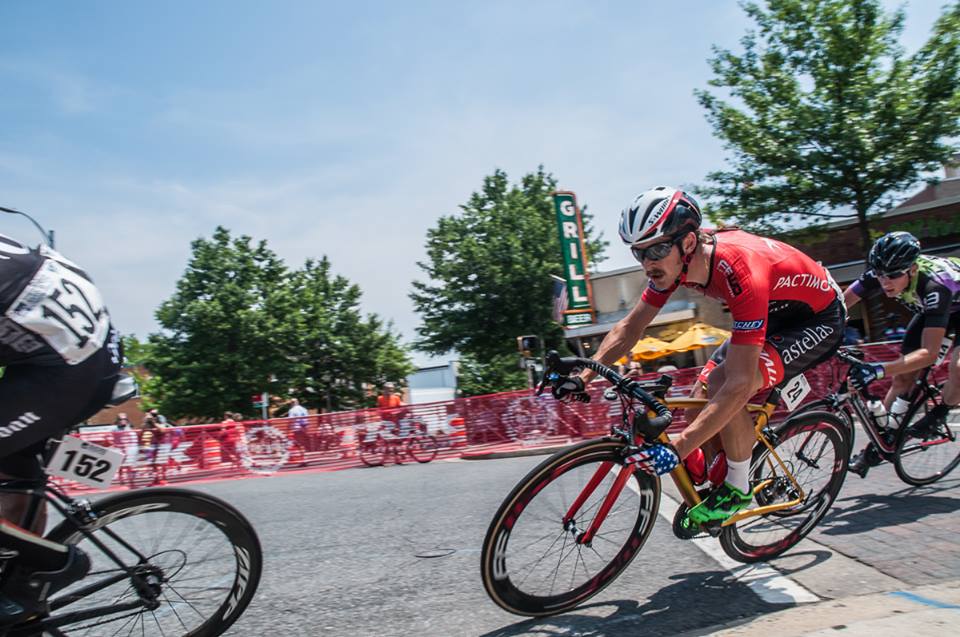 From there it was full gas to the finish.  And by full gas, I mean like flooring your car only to see that the gas meter is reading empty and you see the gas station at the top of the hill but…THE HILL MAN!!! It won’t end. Thankfully around half way, I heard my dad. Probably will remember this for the rest of my life, he was yelling so loud; Overtop of everyone, I couldn’t hear anyone but him. And he was running beside us. Guy is pretty fit, but not a runner. He was running full gas too, and he just kept going and so did I. If this was a movie, I probably would have won-Dad yelling, running beside me, bike breaks, I get off, pick up bike and American Flyers across the line. But life isn’t a movie, and I got 20th.  Holy crap it was awesome though. Still get chills thinking about it.

I was 20 seconds from winning Philly, which- that’s not really that close, but those 20 seconds are what make us cyclists tick.  I’ll chase those 20 seconds for as many years as I have to. I can only hope the next Philly gives me as many good memories as this one did.

From here I’m focusing on the Reading 120, it’s an awesome race with a lot of great climbing. Last year, I was crashed out of the breakaway and ended up breaking a few bones in my hand.  I’m really hoping to come back this year, and experience the circuits up to the Pagoda.  Along with that, my coaching business has been picking up. So GET AMONGST!! If interested, visit the #SITLERCoaching tab on my website, and send me an email!